Skald Fat Scorcher is a fat-burning sports supplement for high-intensity athletes and anyone who wants to take their training to the extreme. It’s made in the USA by Beldt Labs.

Although Skald fat burner certainly looks and sounds (fat scorcher?) the part it is not exactly the strongest fat burner we have reviewed. It does have a loyal customer and seems ideally suited to gym goers and body conditioners.

However, if you are looking for a fat burning supplement to help with cutting, fat loss, and reducing hunger then PhenQ would be a better product in our opinion.

To be honest, I haven’t been able to find out much about the company and it doesn’t appear to be registered with the Better Business Bureau (BBB).

However, according to the information provided on the Skald website, the company was founded by a former bodybuilder and martial artist called James Atkins.

Although Skald is designed to suppress the appetite and boost fat loss capabilities, it’s not a standard diet pill and should not be considered a general weight loss aid.

It’s a supplement for people who train hard and want to be at the top of their game.

How Does Skald Fat Scorcher Work?

Despite the claims of appetite suppression, the formulation doesn’t contain any ingredients that have strong hunger suppressing capabilities. Caffeine is the ingredient that offers the most potential in this regard, but it is in no way a power ingredient.

Caffeine is a good fat burner though, as are some of the other ingredients. Fat burners work by increasing metabolism.

This causes the body to burn more calories than normal.

When used in conjunction with a low-calorie diet, fat burners help you to burn more fat than you you could via diet and exercise alone.

Some of the ingredients, including caffeine, are also thermogenic fat burners. Ingredients of this nature produce a slight elevation in body temperature. This cause the body to lose additional calories into the atmosphere in the form of heat.

This is where things get interesting. The presence of caffeine in the formulation will be enough to provide many users with some extra oomph.

If the formulation can work in the whole new way Beldt Labs says it can, it will provide respiratory support.

The idea is, the formulation will open up the airways and increase the amount of oxygen available to the muscles during training.

Oxygen is important during training. Your muscles need it and the harder you work them the more they need.

When the supply grows short energy production withing the muscles goes into an anaerobic state. This means they are producing energy without oxygen.

When the muscles are worked without oxygen, lactic acid builds up, pain and fatigue set in, and you have to stop. So, in theory, Skald Fat Scorcher should be able to increase training capability.

Training longer will result in greater calorie expenditure and, presuming the right diet, a greater need for fat burning.

What’s the Best Way to Use Skald Fat Scorcher?

You take one capsule every morning, on an empty stomach, 15-30 minutes before breakfast. A second capsule is permissible 5-6 hours later if desired.

If no tolerance issues become apparent, the first dose of the day can be increased to two capsules from day two onward. However, the second dose remains the same (1 capsule). This should not be exceeded because it’s important never to take more than three capsules in any 24-hour period.

As with many other sports supplements, Skald Fat Scorcher needs to be used in cycles. The recommended cycle is six weeks on followed by two weeks off.

Skald Fat Scorcher is one of those annoying products that uses a proprietary blend as an excuse not to disclose any of the inclusion rates.

Some manufacturers use proprietary blends to safeguard their formulations. That’s understandable. Especially with very clever blends that are in demand.

However, there are also plenty of manufacturers using proprietary blends to hide the fact their formulations don’t contain adequate quantities of important ingredients.

Each Skald Fat Scorcher capsules provides 341 mg of a proprietary blend that’s made up of nine ingredients:

However, that still leaves 231 mg unaccounted for. We know it’s made up of the remaining eight ingredients but have no idea of the ratios involved.

What Do The Ingredients Do?

With the notable exception of caffeine, it’s not possible to say what the ingredients in this formulation can do.

I know what they may do because I am aware of their individual capabilities. Unfortunately, they won’t do a lot if the inclusion rates are too low.

On the other hand, some ingredients, citrus Aurantium is one of them, which can be problematic if the inclusion rate is too high.

Lots of diet pills contain caffeine. So do many other supplements. Caffeine is a versatile ingredient and one of the most popular natural stimulants in the world.

Caffeine cuts through the mental fog sharpen the mind and improve mental focus. It also has mild appetite suppressing capabilities.

Probably more importantly for a formulation such as this, caffeine is also a proven fat burner. It works by boosting the metabolism and increasing thermogenesis. (https://www.ncbi.nlm.nih.gov/pubmed/2333832)

The amount provided here is around the same as you’d get by drinking a strong cup of black coffee. That’s enough to help most people to see some good benefits. It’s an adequate dose. Most people can handle 110 mg of caffeine without issue. However, if you are ultra-sensitive to stimulants you may want to give this product a miss. It’s not going to be for you.

White willow bark has similar abilities to those of aspirin. It provides salicin, which is a natural pain killer and also has anti-inflammatory capabilities.

Salicin is also sometimes credited with fat-burning capabilities, but there is no evidence to prove this is so. (https://www.webmd.com/vitamins/ai/ingredientmono-955/willow-bark)

This is the first time I’ve come across this ingredient. That says a lot for its popularity.

Verbascum thapsus is a species of hairy biennial plants. Beldt Labs are using it to soothe the lungs,  improve respiration, and relive pulmonary strain.

Apparently, some people take the ingredient by mouth to relieve asthma and other breathing problems. Unfortunately, there’s a lack of evidence to support its value in this area.

Elecampane is used for treating asthma and lung diseases. It also has the ability to induce sweating.

There’s a lack of proof regarding its abilities in any area. According to WebMD, its “possibly safe” when taken in medicinal amounts and “possibly unsafe” when taken in larger quantities, which may cause vomiting, diarrhea, and other unpleasant side effects. (https://www.webmd.com/vitamins/ai/ingredientmono-2/elecampane)

N-Acetyl L-Tyrosine is an amino acid that serves many important roles within the body. One of the things it does is boost energy. It’s often added to nootropic supplements because it increases mental focus, memory, and learning ability.

Citrus aurantium is a species of orange. It has a very bitter taste. For that reason, it’s also sometimes called Bitter Orange. Citrus aurantium provides syneprhine. It’s a stimulant that can boost energy levels and fat burning.

Theobromine is cocoa derivative that stimulates the central nervous system. Just like caffeine and other stimulants, it increases metabolism and energy expenditure.

The ingredient also functions as a mood enhancer and is probably responsible for the feel-good effect some chocolate eaters crave.

It’s unfortunate that there is no way to know how much green tea Skald Fat Scorcher contains because it’s one of the best natural fat burners available. It’s also extremely good for health.

Green tea catechins increase metabolism and thermogenesis. There is plenty of research that shows this is so.

One study is particularly interesting because it shows green tea catechins can increase fat burning for up to 24 hours. (https://academic.oup.com/ajcn/article/70/6/1040/4729179)

Black pepper extracts provide an alkaloid that boosts the bioavailability of other ingredients and aid nutrient absorption.

The BioPerine brand of black pepper extract is the most powerful form available.  It’s standardized to be 95% piperine and improves absorption rates by at least 30%.

Are There Any Customer Reviews?

Skald Fat Scorcher has plenty of customer reviews and most of them are good. 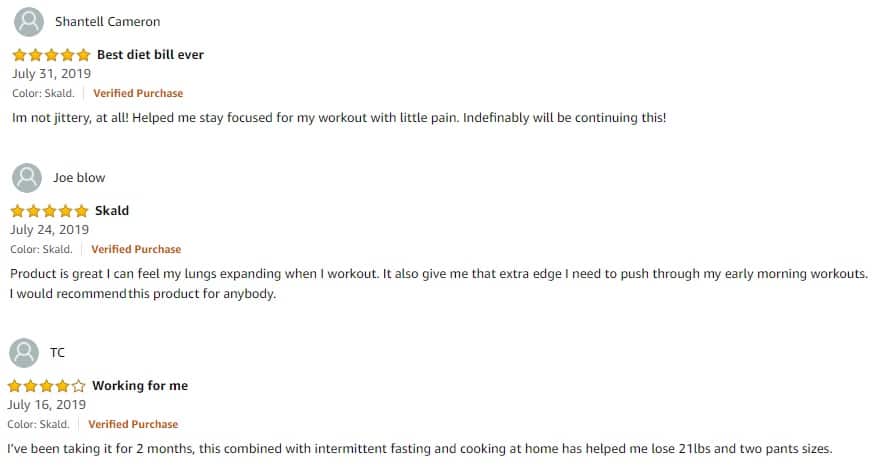 Is there a Risk of Side Effects?

Beldt Labs doesn’t mention if side effects are likely to be an issue.

When I’m reviewing a product and want to find out about the potential side effects, the negative reviews are always my first port of call.

Although, most of the Skald Fat Scorcher reviews are good, due to the high volume of feedback (1,200+ reviews), there are still plenty of negative reviews to examine and some customers state the pills made them feel unwell.

Reported side effects include:

It’s never good to read about side effects but it’s important to remember reports of this nature are in the minority.

In fact, while I was working my way through the negative reviews, I found far more people complaining the pills didn’t do anything at all.

Hit or Miss? (Can You Lose Weight with Skald Fat Scorcher?)

Customer reviews suggest many people have already lost weight with Skald Fat Scorcher. However, it probably offers more value as an energy-providing supplement.

Even though the quantities are unknown, there are several stimulants in the formulation so it seems probable it’s stimulant-rich.

Some people can’t handle a lot of stimulants. That may explain why some users report experiencing side effects.

In my opinion, elecampane and mullein are ingredients that require further study and the lack of inclusion rates worries me.

Skald Fat Scorcher may very well do everything Beldt Labs claims, but if you are thinking of using it I suggest you have a chat with your doctor first. There is no substitute for professional medical advice.

Where to Buy Skald Fat Burner

Skald is only available to customers residing in the USA. If you have the necessary stars and stripes credentials and want to buy Skald Fat Scorcher, you have two options.

The first one is to purchase it via the official website. The alternative is to buy it via Amazon.com. Beldt Labs will charge you a few dollars more if you decide to go this route.

The official site offers a number of bulk-buy packages that involve modest discounts. Beldt Labs also offers a subscribe and save option that involves a 10% saving.

This is the cheapest route to go, but we don’t recommend it. Autoship arrangements are often difficult to cancel and Beldt Labs doesn’t provide any details of the terms and conditions involved.

Skald Fat Burner
Although Skald is designed to suppress the appetite and boost fat loss capabilities, it’s not a standard diet pill and should not be considered a general weight loss aid
Visit Website
6.5 Total Score
Good

Although Skald fat burner certainly looks and sounds (fat scorcher?) the part it is not exactly the strongest fat burner we have reviewed. It does have a loyal customer and seems ideally suited to gym goers and body conditioners.

All product names, trademarks and registered trademarks are property of their respective owners

Be a part of Notification